Madrid Bull leaping is an amazing show in which youngs fight with bulls without any tool. No one bull is getting hurt. Its pure, real and amazing.

Bull-leaping  comes from the ancient Greece.  A ritual performed in connection with bull worship. This ritual consists of an acrobatic leap over a bull; when the leaper grasps the bull’s horns, the bull will violently jerk his neck upwards giving the leaper the momentum necessary to perform somersaults and other acrobatic tricks or stunts

Bull-leaping is still practiced in the south west of France,  where it is traditionally known as the course landaise (although usually cows are used instead of bulls.  These cows are the female stock of the fighting bulls bred for the corrida in Spain. However once a year bulls are used, instead of cows, in the Festival of Art and Courage). The town of Mont-de-Marsan in Gascony is renowned for its fine sauteursor “leapers” and écarteurs (“dodgers”) dressed in brocaded waistcoats. They compete in teams, attempting to use their wide repertoire of skillful evasions and acrobatic leaps to avoid the cow’s charges.

The cow is typically guided by the use of a long rope attached to its horns. So that it runs directly at the performers and is restrained from trampling or goring them should they miss a trick.

Although there is little to no risk to the cow in this form of contest. It is a highly dangerous sport for the human participants; a prominent Montois, Jean-Pierre Rachou, was killed in 2001 when he fell on his head after being hit by a cow.

In France the courses landaises are held from March to October on the occasion of festivals in many cities and villages, including Nogaro, Mont-de-Marsan, Dax, Castelnau-d’Auzan and many other places. There are also national championships.

A similar but even more dangerous tradition of non-violent bull-leaping, called  recortes. It is practiced in some parts of Spain. Athletes, known as recortadores, compete at dodging and leaping over bulls without the use of the cape or sword. Some recortadoresuse a long pole to literally pole-vault over the charging animal. Which is both larger than the type used in the French sport, and unrestrained by any guiding rope or similar safety device.

CampoToro show you this ancient show

Come with us to see this amazing show, Madrid Bull leaping. Contact us at campotoro.es@gmail.com. We show you the art, the pasion and the tradition of bullfighting with some of the best spanish performers. 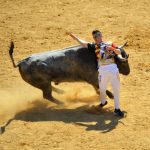 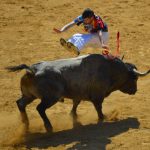 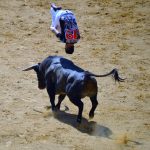 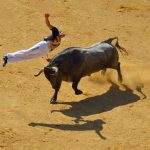 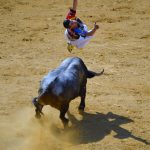 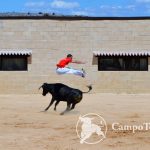